“Hey Hey, Ho Ho, Exploitation’s got to go!” was chanted by protesters on the sidewalk in front of Publix supermarket on Azeele St. in Tampa Florida. Over 250 demonstrators showed up to voice their anger towards the two large corporations of Publix and Wendy’s on Wednesday March 29th. The “Return to Human Rights Tour” event was the culmination of a 12-city expedition which began in Ohio and generated a great amount of support and awareness to the living conditions of our farmworkers. 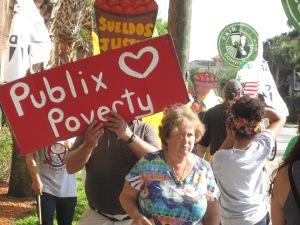 The sun was still beaming down at 5:00 p.m. as activists showed up and began an hour of marching in front of the Publix. After an hour, the group walked to the nearest Wendy’s on Kennedy Ave. to protest the organization that claims it doesn’t make financial sense to spend an extra penny on workers but instead buys multibillion dollar ads during the super bowl.
Publix and Wendy’s are the last two major companies remaining that haven’t signed the fair food pledge to pay more for their produce. The pledge pushes for equality and demands that workers who pick our food in fields should be treated with dignity and paid fairly for their sweat and labor. In the past, workers would get paid way below to poverty line for the long hours and labor they put forth to pick our produce. These workers have lived in unfathomable conditions where no running water was present and over 10 people stayed in smaller trailers.
The drums, loudspeakers and voices of the hundreds drew the attention of commuters on their way home from work. Many honked in support and rolled down their windows to express their agreement for the actions being taken. The large, colorful, and visible signs held by most of the protestors showed just how much equality meant to them. Some signs read “stop farmworker exploitation” while others read, “fair food now, respect, we want justice, and 1penny more.”
“There has always been a place for students to act in solidarity with these farmworkers,” explained Alex Schelle, a student of New College in Florida located in Sarasota Florida. “Students are so 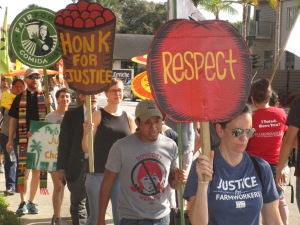 important to these causes because they help to apply the pressure to these companies.” Besides a multitude of farmworkers and students, there was also a large presence of religious communities that also came to lend a helping hand and support.
Two organizations devoted to the Florida tomato worker’s human rights and freedoms are the Coalition of Immokalee Worker’s and the Fair Food Program. The coalition has been in place for over 2 decades and has made huge strides in combating human rights abuses right here in Florida.
Local supporter and Tampa native Sydney Eastman joined this cause after already being involved in women’s march rallies. She said, “The message really spoke to her and I was happy to show support to a group that liberated 1,200 farmworkers from actual slavery. This movement and women’s rights are both looking for the same things,” she added.
The protest brought to light the hypocrisy of large corporations who call every move business sense but then turn around and waste millions of dollars. The gathering of a diverse group of people showed that equality is still a subject that needs much attention in our society but also shows the power humans have when they stand together
for just causes.