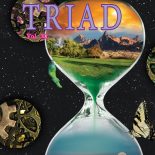 Redhead Express is a country band currently based in Nashville that spends a significant amount of their performance time here in Florida. For the past three years, they have played at the Chasco Fiesta in New Port Richey and for the past four years, they have performed at the Strawberry Festival in Plant City. They also spent most of this past winter rolling through Florida.
Originally from Palmer, Alaska, Redhead Expressed moved in 2007 to Nashville, Tennessee, as their home base. They first thought they would only be gone a year to study music in Virginia and the Carolinas, but they decided to relocate to Nashville permanently, partly so it would be easier to tour with the band.
Many bands claim they are families, but Redhead Express truly is family. The four main members, Alisa (violin), Meghan (bass), LaRae (banjo), and Kendra (guitar) are all sisters. They have three brothers who play with them and on their own as the Walker Boys.
Joseph plays drums with Redhead Express, Sean plays guitar, and Ammon plays bass and sings. At the Chasco Fiesta, only Redhead Express plays, with the boys all playing on different songs, but at the Strawberry Festival, the Walker Boys have their own daily sets as well. 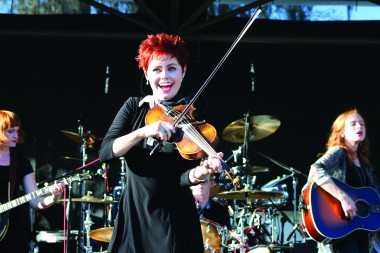 Husbands, parents, and children all tour with the band as well, with the husbands and parents working as managers, merchandise supervisor, and soundmen. They all say they have really learned to get along since they spend so much time together in their RV and they truly are a tight knit family.
Each festival is a little different for Redhead Express. At the Strawberry Festival, they play three shows every day and this year, the Walker Boys played two shows each day. For the Chasco Fiesta, Redhead Express played one show, but it was much longer than each set at the Strawberry Festival. “We try to have a good mix with both upbeat and slower songs,” Alisa adds.
They also said the type of audience dictates some of the set. For “captive audiences” at smaller shows, they are able to play slower songs and more “story songs,” but at festivals, they play songs people will recognize. At the Strawberry Festival, both bands play different sets during the day because some of the same people go to multiple shows.
Redhead Express also plays shows in smaller venues and churches in the Tampa Bay area. This winter, they played one show where it was all Christmas music and stories involving their family.      They don’t get to do too many Christmas sets but would like to put out a Christmas album at some point.
When not playing music, the band members all have different activities. Kendra writes and spends time with her little boy and husband. During the holiday season, she likes to knit.
Alisa enjoys reading and dancing. She wants to learn to tap dance. LaRae enjoys crafts and makeup and is studying cosmetology. Meghan loves reading, hiking and being out in nature. Joseph is an artist and does pencil drawings and realistic portraits. Sean is the videographer of the bunch and has filmed the girls’ videos. He also produces music. Ammon enjoys camping and gardening.
You can find more information about Redhead Express on their Facebook and YouTube pages, as well as at redheadexpress.com. They have two CDs of cover songs and one of mostly originals. The Walker Boys also have an e.p. you can buy. Check them out and go see them next time they are in Florida.